ABOUT US
And what makes us special

ABOUT US - OUR STORY

BOSFAM is an NGO founded in 1993 in Tuzla, during the times of war. It was a response to the situation we were in. A large number of people of Bosnia and Herzegovina, and mostly women, children and elderly, needed help. Women, victims of war, were arriving from different places; expelled from their homes, they became breadwinners of their families. They had small children and elderly parents to take care for and were surrounded with poverty, misery and everything that a war brings on.

In such a situation, all we wanted was to live and work; we wanted to survive and stay as normal as possible, in such an abnormal situation we found ourselves in.

Aware of their situation, their role and responsibility, the women said:

And so, the BOSFAM – BOSNIAN FAMILY was created, as a local NGO.

We must emphasise, we hadn’t know what an NGO was when we started making it, but we did know what we did not want to wait for aid and be helpless; we felt the hardship of the war on our shoulders, we knew we had to to something for both, ourselves and others. This is how the slogan (motto) of our organisation came to be:

We work, we associate,

We help ourselves and others. Come, join us!

Thought leader and initiator of BOSFAM was Munira Hadzic, called Beba. Before the war, she had been a math teacher and then a principal of the Primary School in Srebrenica, for 12 years.

In May 1992 she was expelled from Srebrenica. With many other displaced persons, she arrived to Tuzla on a truck.

Under her leadership, in a very short period of Time, Bosfam managed to organise and mobilise a support network with the aim to provide support to families and friends and tend to their needs.

This was especially visible during the time of the Srebrenica fall, when women from Bosfam, being partakers of the tragedy themselves, received many of the women from Srebrenica, who had lost their family members; they gave them support and involved them in the Bosfam’s activities.

All of its years of work, BOSFAM goes on providing the surviving family members support in continuing their lives, taking care of their children and their elderly, and giving them work to earn at least a part of their living expenses.

We chose the name “Bosnian Family” at the time of the war when many of us survived exodus, many of our closest family members died, many were displaced. We decided to provide assistance and support through creation of a new family.

We chose the name BOSNIAN FAMILY – BOSFAM, because of the tradition in Bosnia and Herzegovina:

Women in Bosnian Family associate and work together, regardless of their age, religion, ethnicity or education – they are Women of BiH.

In its Centre, Bosfam provides place for association, information sharing and education of women, and its Centre is a place where women are always welcome.

The Handicraft Project was initiated as a war-time project of occupational therapy. It has grown into a project of economic support for women who want to earn their daily bread through production of beautiful hand-made items.

TRADITION AGAINST OBLIVION
Hard-working women of BOSFAM wanted to do something to preserve the memory of their loved ones who were the victims of bestialities of the war, and specifically the 1995 Srebrenica genocide.

And again – with the help of tradition and handicraft… 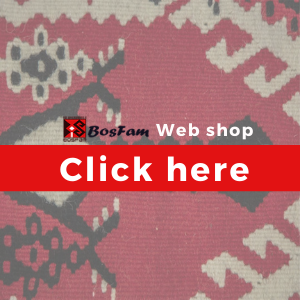